I first set my jaded eyes & allegedly discerning ears upon the triumvirate that trade under the nomme de gare of: ’the Subterranean Gentleman’ (shortened to a curt but cute ‘Sub Gents’) about a year ago at Manchester’s ‘Rebellion’ venue,  and I opined then that their robust & rattling set had left the venue’s skeletal foundations shaking, and the Atlas bar next doors’ glasses quaking in their wake; but as the last crashing chords coalesced there was a sense of ‘unfinished business’ left hanging in the air…..

Last Wednesday (22/02/2017), the unfinished business was pleasingly put to bed with another deft display of artful music and ribald rhythms, and as Neil Diamond once winningly warbled: ‘what a beautiful noise’.

The opening song, which was actually more akin to a musical manifesto if truth be told, was the just released (on Steel City Records) ‘Searchlight Eyes’, and just as they were stridently transitioning from verse into chorus, bass player Noel’s bass rig/sound disappeared – leaving a hollow chasm in the all-important ‘low end’.

Nominal leader, guitar alchemist Fletcher and drummer Shaun just seemed to look at each other as if this had been planned and waited for the sound tech to do what needed to be done. Fletcher rather helpfully sound tracked his scurried and (pleasingly) panicked movements with a tasty feedback symphony, which the legendary, and now sadly departed Birthday Party guitarist, Rowland S. Howard would have heartily approved.

Sound restored, the band seemed to regroup and redouble their efforts (if that’s possible) and for the rest of their muscular and sinewy set to ride on a wave of indignant righteousness and fearsome fire, throwing each track at the audience as if they were now warriors now at war – like songs from the Somme. 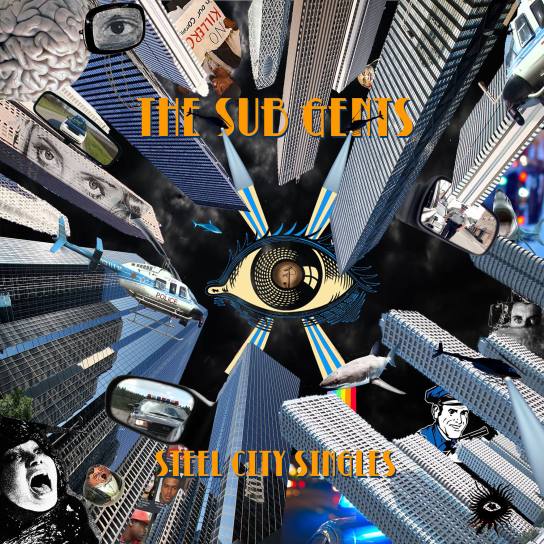 What is noticeable as they careened and spiralled through their set, replete with songs of quality and distinction such as: ‘The Barbs’ and ‘Arc of Descent’ (that title though!), is that they seem to take choice moments from other artists songs for example a solo redolent of the Manic’s James Dean Bradfield say, or an undulating bass line not unlike Muse’s Chris Wolstenholme, or an At The Drive-In drum tattoo and cleverly filter it through their own Utopian/dystopian Sub Gents worldview. And what emerges through the other side of this virtually punk process is a song that’s absolutely stamped with their own authority. Neat trick, because they certainly don’t sound like copyists.

And all too soon it’s done – a tight, economical, fabulously played, and most importantly, commercial set that needs your resolute and unwavering support – they certainly have mine..

Allow yourself to be Gentrified, you’ll be glad you did…

‘Searchlight Eyes’/ ‘Those Creeps’ can be purchased/heard here: