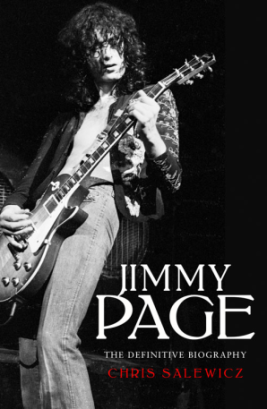 As an avid reader of Chris Salewicz’s fiery op-eds and spikey reviews in the mid-seventies to early eighties for the New Musical Express, I suspected that before I’d read a word of his 2006 book Redemption Song: The Definitive Biography of Joe Strummer, that the late, great Clash and Mescalero’s frontman’s reputation was in ‘safe hands.’

One word that stood out from that title intrigued me ‘definitive’ – it’s a bold pronouncement indeed. But once I’d read Chris’s Joe biography and then compared it to some of the other asinine ‘cash-in’-type hack jobs that trail in the wake a high-profile artist’s passing, I quickly realised that Redemption Song truly does deserve that ‘definitive’ epithet. But what I also admired about Chris’s Joe biography was it was that it was unflinchingly honest. Joe was a human being and not a god, he also had unappealing traits and habits like the rest of us mortals, and these were unflinchingly detailed also. And so by definition, it was definitive.

And so, as someone who has a lot of time for both Led Zeppelin’s often astonishing oeuvre and it’s undoubted force-of-nature, the perpetually fascinating James Patrick Page, I was buoyed by the fact that this freshly minted biography of Page, Jimmy Page – the Definitive Biography has also been authored by Mr Salewicz.

Having read and reread its colossal 500 or so pages (its forensic detail and sheer scale are hard to take in first time around) my second impressions are that it’s not only immersive and substantive, but also engaging and endlessly entertaining. It’s assiduously researched and details almost lovingly everything one might wish to know about Page’s labyrinthine journey: from early recording sessions in long-gone musty metropolitan recording studios (including all of the other key dramatis personae who were present), to Page’s obsessive remastering of Led Zeppelin’s magnificent back catalogue.  Fans who believed that they knew everything about both the ‘golden gods’ and Page in particular, are going to adore and even treasure this last word on Page (pun intended).

This is as fine and as authoritative a biography as I have read, and in some respects it’s almost a mirror image of its subject: multi-layered, enigmatic and very much worth investing your time in. Rather than a conventional review, I thought it might be more instructive and indeed informative to ask Mr Salewicz himself about what might very well be his literary magnum opus, and he kindly agreed.

Just how much work went into researching and then writing ‘Jimmy Page – the Definitive Biography’- is such a huge project quantifiable?

I think I’ve been working on this ever since I saw Led Zeppelin at the beginning of 1970 at Leeds university, a life-changing moment. And when I was on the NME from 1974 to 1981 I heard loads of stories about Page and Zeppelin, some of which were unprintable!

I interviewed Jimmy for the first time at the beginning of 1977 for a US magazine called Gig, and I remember very diligently researching for that, which took place at Swan Song’s offices on the New Kings Road in Chelsea.  I believe in thorough research: at least you know where you are if you’ve done that. At school one of my favourite subjects was history, and I consider that one of my roles is as a social historian – so I want to get it right! And once you are writing, and this took me two and a half years, things come to you seemingly from nowhere, as though by magic: possibly because you are putting out the energy to attract appropriate information to you. And so, yes, I researched this very thoroughly indeed.

Was it something you dipped into whilst working on other projects or did you devote all of your creative energies towards it?

No, I just got on with it. Although first I finished off a film script I had been working on, which inevitably took longer than I hoped it would. At one point whilst writing this I was utterly knackered and thought I had to have a holiday.  But then I realised I couldn’t have a holiday as I had to keep writing – I wouldn’t finish the book otherwise. And then I had a blessing: Chris Blackwell, who started Island Records all those years ago, lent me a cottage for a month at Goldeneye, the estate he owns on Jamaica’s north coast, where Ian Fleming wrote the Bond books. So I would get up early and write until about 3pm. Then I would swim for a couple of hours.  I got a lot done, over 20,000 words, broke the back of a section I was having trouble with.

Every passing year there will necessarily be a new generation of people discovering Page and Led Zeppelin Was there a deliberate attempt to make the book as accessible as possible to ‘new’ fans?

I always want my books to be accessible and readable, but it’s not something I don’t do it consciously at all. The hope is that I’m telling a story.

The preface is an account of a face-off between a coke- addled David Bowie and a taciturn and intimidating Page. Where did you get this remarkable story from?

From Tony Zanetta who worked for Mainman, and effectively managed Bowie in the US for Tony DeFries. A confidentiality agreement precludes me from saying any more!

Was your approach to writing this biography different to when you wrote your biography of Joe Strummer, because you were close friends with Joe.

It’s not that different, really. You just try and feel the story and then seek out its essence. This might sound like an over-simplification, but it really isn’t that different.

The exploitative attitude to often under-age girls by bands such as Zeppelin, Aerosmith et al during the seventies was quite shocking!

It’s all a bit odd, isn’t it? Those young girls were not exactly guaranteed to stimulate your brain, were they? Though presumably that was the point. As people will read, I sought professional advice from Nanette Greenblatt, a friend who is a life coach and therapist before writing those parts..

How much of Page’s enigmatic and eccentric persona do you think is genuine and do you think he really signed a Faustian pact to attain earthly riches?

I think Jimmy Page is frequently misunderstood. His nervous shyness is interpreted as arrogance. And he is one of life’s natural loners, a typical only child. As for selling one’s soul? I don’t think so, although that doesn’t stop people attempting to do it, of course!

You sound very knowledgeable with regards to ‘occult’ practices and topics. Is this something you had always been interested in, or was it something you researched in preparation for your 1975 interview with Page?

I had long been interested in those matters, although not obsessively. I studied English Literature at university and my professor was supposedly the world’s greatest authority of the Irish poet W B Yeats. Yeats was a member of the Golden Dawn and so was Crowley, and I have always had an affinity for Astrology.

You established yourself as a punk-championing writer with the NME whilst still appreciating the work of Led Zeppelin. A bit unusual in those times?

I don’t think you should restrict yourself to just one cultural arena. You need the overview to see where that specific area sits.

Your interviews with Page in 1977 and 1979 are remarkable, in that you are confident and even confrontational. Do you feel that he respected you for that?

I felt an affinity with Jimmy Page from the first time I met him, and I hope that comes across in the book.  I think that he is an extremely great person and a true artist, he really is an absolute major figure of our time. Led Zeppelin were very much his art project – that art school training didn’t do him any harm at all! But by the time of my second interview he unfortunately seemed a bit battered and fragile.

How difficult was it to say to yourself ‘that’s it – it’s finished!’

Well, there was a part of me that thought I wouldn’t have minded another year on it..

Are you prepared for the inevitable ‘Book of the Year’ awards?

Well, I noticed that the Sunday Times, who gave it a great, lead review, did their ‘Books of the Year’ yesterday and didn’t even include popular music books…hmm.

Is it now time to switch from writing ‘definitive’ biographies to an autobiography?

Some have suggested this. After working on this for the best part of two years, I think the next order-of-the day is some promotion, then some well-earned R&R –who knows after that!

Thanks for your time Chris!